Skip to the content
Sam Heughan and Caitriona Balfe are a team on and off the screen.

The “Outlander” actor shared a photo from the Stirling Scottish Marathon in Scotland on Sunday. He captioned the tweet, “Is it too late to go back to bed? Wish us luck!” 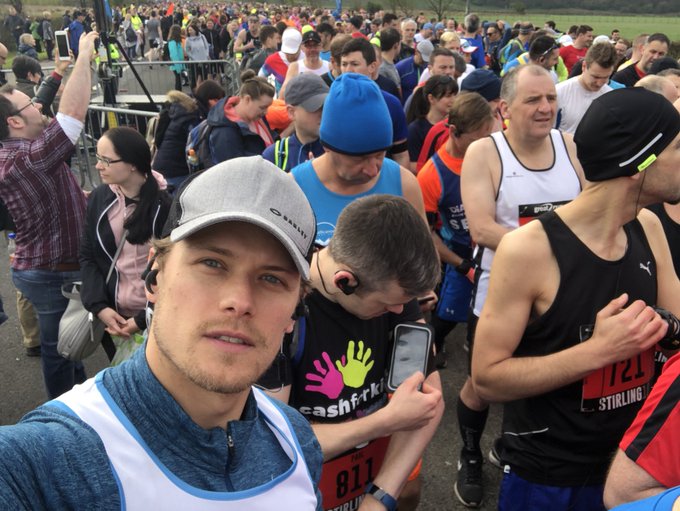 Is it too late to go back to bed? Wish us luck!

And luck he was wished. His co-star Balfe sent good vibes his way. 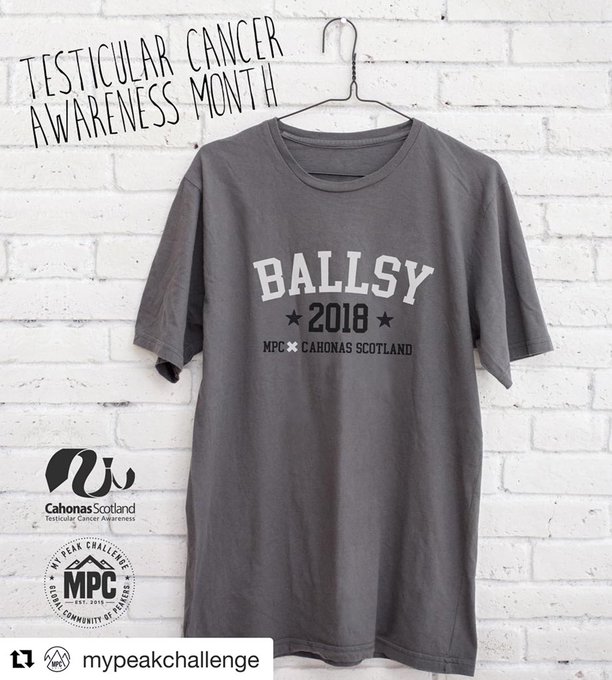 One down… one to go!
You can still support @CahonasScotland and @MyPeakChallenge
My “Ballsy” peak challenge, ltd edition MPC + Cahonas T-shirt, http://mypeakchallenge.shop  100% profit to Cahonas.
Donate directly http://justgiving.com/campaigns/char … Every 10$ buys a raffle ticket..x

Want to get the latest Outlander season 4 filming report? We’ve got some fresh information about filming in the Pertshire village of Dunkeld.

Information coming in via social media strongly suggests that Dunkeld will be the setting for at least the next day or two’s worth of production, if not longer. There are film trucks at the location and there have been some reports floating around out there for a while. It’s a little more unclear at present as to just how many major cast members will be there. (We never like to promise anyone just because we don’t want to create any undue expectations for a particular locale.)

What we can say about Dunkeld in general is that it’s a little bit further north in Scotland than where Outlander has been inclined to visit as of late. While the majority of this season has been filmed reasonably close to Glasgow, Dunkeld is located a good 70 miles or so away. Obviously the merit in traveling around is to showcase a wide range of geography, but beyond that it is also to capture some specific terrain for what is certainly the most difficult season of the series geographically to date. When you have to recreate a place like North Carolina, one of the challenges that comes along with that is that you need to be able to find ideal matches. That can be difficult and you do need to think outside of the box sometimes. This show, perhaps more so than almost any other out there, has to be incredibly creative. Most series have more established sets than they can revisit. While Outlander has that, they also film at length in what appears to be untapped terrain. You do have to make things appear as though they are centuries in the past!

What is important at present for Outlander is simply that the series continues to move things along as we get closer to the end of production this year. We’re charting towards an end date, for now, in the month of June. There’s still a whole lot more that needs to be done before we get to that point.

Hopefully, we’ll have another filming update to share within a day or so.

Guests were treated to previews of four exhibitions, including jewellery designs by Judy Blame, the legendary artist – known for working with Neneh Cherry and Boy George – who passed away earlier this year.

READ MORE
The DIY bedroom brand winning over Glasgow’s fashion-conscious youth
A Roomful of Lovers (Glasgow) by Richard Wentworth and Victoria Miguel was shown in the Galvanisers, with strings of heavy steel chains criss crossing across the huge space and dangling sheets of text.

Jarvis Cocker and Steve Mackey brought their Dancefloor Meditations for some escapist fun, with party goers taken on a ‘mind-altering journey into musical consciousness’ – all in complete darkness, and with music ranging from iconic dance numbers to Marvin Gaye’s Sexual Healing.

The Pulp frontman’s appearance in Yorkhill was followed by a quick visit to Mono for Record Store Day on Saturday, as reported on Glasgow Live.

The biggest festival for contemporary visual art in Scotland, Glasgow International runs for three weeks, with 265 artists and 78 venues across the city involved.

It’s on until May 7 and you can find out more over at glasgowinternational.org.

Edinburgh airport chief executive Gordon Dewar has described the Scottish government’s decision not to reduce air passenger duty (APD) as a “short sighted” move, which contributed to Norwegian’s decision to cut two routes from the gateway this winter.

Speaking at the Routes Europe conference in Bilbao on 22 April, Dewar described the decision by the Scottish executive not to go ahead with plans to replace ADP with a new lower air departure tax in April 2018 as “unfortunate”.

“They [Norwegian] were promised by the Scottish government that APD was going to be reduced by the end of this parliament, which is looming, and yet there is no commitment to do that yet,” he says.

Norwegian previously opened routes from Edinburgh to Stewart, Hartford and Providence. It suspended flights to Hartford in March and will halt services to Providence this winter.

The Scandinavian airline noted that when it began operating the Hartford route in June 2017 there was the “prospect” that Scotland’s government would cut APD this year.

Dewar notes Norwegian experienced “soft” load factors on the two routes. He suggests that if the government had “done what it said” and cut APD, this would have helped the Oslo-based carrier maintain those services.

In October 2017, finance secretary Derek Mackay told the Scottish parliament that securing EU approval for continuing to exempt Highlands and Islands airports from air tax would delay the whole process of reducing APD.

Dewar said he was “still very confident” that the Scottish government could be persuaded to cut APD within the next two years.

Historic Environment Scotland (HES) said that people had come from across the world to see sites associated with the time-travel fantasy starring Sam Heughan and Caitriona BalfeSam Heughan and Caitriona Balfe. It said that the “Outlander effect” had led to a 27 per cent increase in tourists from the US and a 19 per cent increase in those coming from France compared with the previous year.

Visitor numbers to Doune Castle, the location for the fictional Castle Leoch, are up by 227 per cent since 2013, when Outlander was first screened. The 15th-century Blackness Castle in West Lothian, the setting for the Tv series has seen a huge rise in visitor numbers .

Stephen Duncan, Director of Commercial and Tourism at HES, said: “Our record breaking visitor figures, including across all of our top ten sites, are a tremendous achievement for Scotland’s heritage tourism sector, reflecting the continued interest shown by tourists and home-grown visitors to learn more about our rich Scottish heritage.

“The exchange rate, as well as strong airport numbers, have both contributed to the growing figures.

“This rise in visitor numbers at our staffed sites has also been complemented by visitor growth at our unstaffed free access properties, bringing the overall total to an estimated 12 million.”

The top 10 most-visited HES attractions all individually celebrated record-breaking years, with over 2 million people passing over Edinburgh Castle’s drawbridge, an increase of nearly 300,000 visitors in comparison to the previous year.

Following a settling in period, Norwegian Airlines has now announced that they will add 90,000 seats from Edinburgh, Dublin and Shannon airports to their winter schedule which runs from 28 October to 31 March 2019.

The airline began with three routes from Edinburgh Airport to Providence, Stewart New York and to Hartford.

While the Providence and Hartford flights will stop later this year, the Stewart route is strongly supported and will be increased to a daily service with flights from £149.

Stewart Airport is as yet small, but this has the added benefits of short security queues. It is very easy to get from the airport to downtown Manhattan by bus or train, and as the airport is set in up state New York, you see very pretty countryside en route. This might make for an alternative New York based holiday in itself. We just travelled to New York courtesy of Norwegian and the flights were full both ways, and it appears that this is the route which has strongest demand from the rearrangement of routes now planned.

The Boeing 737 MAX planes are newly fitted out with an average age of under 4 years old, making them greener than many rivals. No, there is no upper class or business class, but you get what you pay for. You can choose to pre-order a meal or you could actually stop at one of the diners in the nearby town ahead of boarding your flight which leaves Stewart at 9.25pm.

There is free inflight Wifi allowing you to access some entertainment through your own tablet or phone. Norwegian’s numbers are growing impressively with 362,613 more passengers choosing Norwegian in March 2018  than in the same month last year. Even though the airline admits that the date Easter fell this year impacts on the March figures, it is still many planes carrying many passengers to their destinations.

In Edinburgh we can fly to Barcelona with Norwegian as well as Stewart International New York.

Thomas Ramdahl, Chief Commercial Officer at Norwegian said: “Consumers can now benefit from more high-quality flights to the USA this winter as we focus on boosting services that reflect strong passenger demand.

“We’re giving passengers on both sides of the Atlantic more affordable choice, so we’re delighted to increase the number of flights that brings the US east coast closer to Ireland and Scotland this winter.”

Norwegian also operates the first transatlantic flights in Cork Airport’s 50-year history with a three-weekly service to Providence and the only nonstop services from Belfast to the USA in the busier summer season. Flights from Cork to Providence and Belfast to New York will continue through October and have been received positively by travellers on both sides of the Atlantic. Norwegian will continue to assess its route schedule for summer 2019.

Norwegian Airlines is currently rumoured to be a takeover target for British Airways due to its outstanding success and growth record .

Norwegian is the world’s sixth largest low-cost airline, carrying around 30 million passengers per year to more than 150 global destinations. The airline has around 150 aircraft in its fleet with an average age of 3.6 years, making it one of the world’s youngest fleets – the airline also has more than 150 additional new aircraft on order.

Historians who maintain the Culloden Battlefield in Scotland are reportedly blaming fans of the novels and TV series for trampling the area around the Clan Fraser memorial .

The property manager of Culloden says more than 180,000 people visited the battlefield last year, up 28 percent from 2016. Some even left behind little cutouts of Sam Heughan, who plays Jamie Fraser on the Starz drama.

The Battle of Culloden was teased at the end of season 2 and depicted in the premiere episode of season 3 on Outlander. It was a brief re-creation of the actual confrontation that took place on April 16, 1745 between British troops and the Jacobite forces of Bonnie Prince Charlie. In the series, it’s where Jamie finally kills Black Jack Randall (Tobias Menzies).

“Some of the things I have seen at Culloden have really got my back up,” Alasdair MacNeill of the Circle of Gentlemen, a Jacobite appreciation society, tells the Daily Record. “A lot the visitors are American and seem to think they are on a film set rather than a war grave. They maybe don’t know the history. But how would they feel if I walked my dog across Gettysburg?”

The National Trust for Scotland is reportedly hoping to reseed the area around the monument. In the meantime, Outlander series author Diana Gabaldon weighed in on the phenomenon with a not-so-subtle message to fans to tread lightly on such hallowed ground.

Katey Boal and her team do a wonderful job in conserving, curating and presenting this precious part of Scotland’s heritage, and I’m sure that all Outlander fans are more than grateful and appreciative of their efforts, and I am sure they will make every effort to support them. https://twitter.com/ScotlandNow/status/985868066021142528 …